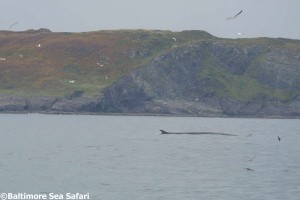 On our Baltimore Sea Safari boat trip on Tuesday 15th of September our first sightings were of Harbour Porpoise inside Baltimore Harbour, and then we continued outside in search of whales and dolphins. We encountered 200+ Short-beaked Common Dolphins and 6 Minke whales feeding aproximately 2km SE of Baltimore. The whale and dolphin watching was excellent and it was about to get a whole lot better for all those on our Baltimore Sea Safari boat trip. A Fin whale slipped into the area, and began to feed in close proximity to common dolphins, less than 1.5km off Baltimore in West Cork. All aboard our Baltimore Sea Safari boat ‘Seafari 1’ were being treated to the best whale and dolphin watching experience that you can get anywhere in Europe, the Fin whale, 10+ Minke whales and 100’s of Common dolphin were all feeding in an area of about 1.5km square, just off Baltimore. The Fin whale was lunge feeding, which is when the whale lunges at speed through the water with its mouth open gorging itself on tons of fish per mouthful. The whale watching experience of seeing 60-70 ton, 25m animal thrashing powerfully through the ocean feeding at high speed, while dolphins and other whales are feeding on the same baitball is an amazing sight to behold, nature at its magnificent best. Baltimore Sea Safari operates daily boat trips from Baltimore in West Cork, and our trips were Trip Advisor Certificate of Excellence winners in 2015. 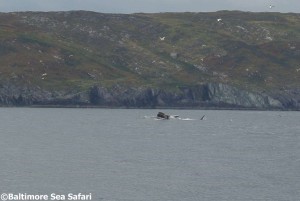 To guarantee your seat, pre-book you trip!

We usually operate from the Ferry Pier in Baltimore. However, trips can also be arranged from other ports in West Cork on request.
Share this post

This website uses cookies to improve your experience while you navigate through the website. Out of these, the cookies that are categorized as necessary are stored on your browser as they are essential for the working of basic functionalities of the website. We also use third-party cookies that help us analyze and understand how you use this website. These cookies will be stored in your browser only with your consent. You also have the option to opt-out of these cookies. But opting out of some of these cookies may affect your browsing experience.
Necessary Always Enabled
Necessary cookies are absolutely essential for the website to function properly. This category only includes cookies that ensures basic functionalities and security features of the website. These cookies do not store any personal information.
Non-necessary
Any cookies that may not be particularly necessary for the website to function and is used specifically to collect user personal data via analytics, ads, other embedded contents are termed as non-necessary cookies. It is mandatory to procure user consent prior to running these cookies on your website.
SAVE & ACCEPT