On Friday 14th of August we were running one of our Baltimore Sea Safari boat trips, weather conditions were not good offshore with 20-22kts of NW wind and a 1.7m (waves) swell. We departed Baltimore in West Cork at 2pm and visited a Common seal colony adjacent to the harbour, before taking a tour through the islands and into the sheltered waters of Roaringwater Bay. We visited Atlantic Grey seals on nearby islands, and toured through the spectacular scenery that this coastline is famous for, seeing beacons, towers, castles (including Jeremy Irons Kilcoe Castle), and sighting birds and wildlife throughout the trip. 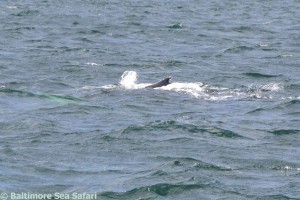 Towards the end of our trip we decided to take one look offshore in the shelter of Sherkin Island, to see if we could get any Common Dolphin sightings. We cruised west in the relatively sheltered south shores of Sherkin Island, until we met big sloppy waves at the edge of the Gascannan tide line, where we turned our stern to the weather and ran slowly downwind keeping an eye out for wildlife. We were due south of Baltimore harbour when we saw a ‘splash’ (which actually turned out to be a blow, flattened by the strong wind) and two common dolphin approaching from the SE. We took the boat out of gear and just ran along just surfing a wave and watching the dolphins. As the two dolphins got closer we could see a shape approaching underwater behind them, and as just as they were aprox 20m out from the boat a blow and a Humpback whale surfaced, the dolphins were actually riding on the pressure wave created by the 40ft (40 ton) whale. To the great excitement of all on board we saw two more blows and clear surfacings by the Humpback whale before it arched and dived deep, unfortunately not raising its tail fluke for us. We drifted about in the area for 14 minutes and then saw a Humpback traveling to the west only 20m off the shore of Sherkin Island. We tracked to the west for a short while, seeing plenty of Common dolphin and watching for the whale, but conditions were not great for a westward passage so we returned to Baltimore Harbour. As we were departing the area three other whale watching boats affiliated with Baltimore Whale and Dolphin Watch were arriving into the area, Baltimore Whale and Dolphin Watch is a group sharing of sightings information between the commercial, pleasure and leisure boats in the area. All off the boats enjoyed Humpback Glimpses. A later assumption amongst the boat skippers is that there may have been two Humpbacks tracking to the west, as one of the boats was watching a Humpback traveling west along the shoreline on the SW side of Sherkin Island, when another skipper was reporting blows off his bow in the Gascannan tideway 600m further to the SW of his position. It was a great experience to encounter a sighting like that on a day when weather conditions were not conducive to good whale watching.

To guarantee your seat, pre-book you trip!

We usually operate from the Ferry Pier in Baltimore. However, trips can also be arranged from other ports in West Cork on request.
Share this post

This website uses cookies to improve your experience while you navigate through the website. Out of these, the cookies that are categorized as necessary are stored on your browser as they are essential for the working of basic functionalities of the website. We also use third-party cookies that help us analyze and understand how you use this website. These cookies will be stored in your browser only with your consent. You also have the option to opt-out of these cookies. But opting out of some of these cookies may affect your browsing experience.
Necessary Always Enabled

Any cookies that may not be particularly necessary for the website to function and is used specifically to collect user personal data via analytics, ads, other embedded contents are termed as non-necessary cookies. It is mandatory to procure user consent prior to running these cookies on your website.